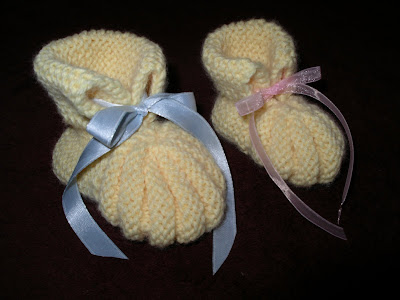 Shown above are a large 4 1/4” bootie and a small 3 1/2" one, using the pattern below. The pattern and illustrations are for knitting the large bootie. Numbers in parentheses are for the small bootie.

Do a 4”x4” gauge swatch with the needles of your choice. For both of the booties shown below the following was used, but you may use any yarn or needles you wish, as the directions below are in terms of finished measurements:

After determining your gauge, cast on enough stitches for a width of 5” (4”). Leave an 18” tail for sewing up later. In garter stitch (knit every row), make a 5” (4”) square. Cast off half the stitches on the needle and now begin working the welt pattern as follows. If you have an odd number of stitches on the needle, then round up to the nearest whole number to figure how many stitches to leave remaining on the needle. 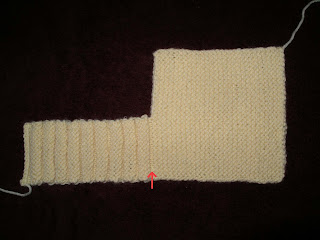 Work the welt pattern until a length of 5” (4”) and cast off knit-wise, leaving a tail 18” long for sewing up. To measure the welt pattern length, place the piece flat on a slippery work surface and allow the welts to relax to their natural rippled state, then measure. End the welt pattern repeat on a R4 pattern row. Use your judgment as to whether to slightly stretch the welts out or push them together to decide when to end on a R4 pattern row. If it seems 50-50 then it's better to slightly stretch the knitted piece out. The piece should appear as in Figure 1. Note the figure shows the piece right side up, where one of the welt “valleys” (red arrow) is immediately adjacent to the garter stitch portion of the piece. Keep this right side in mind when sewing up. 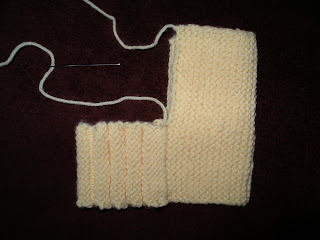 The welt patterned portion is the toe of the bootie. The garter stitch patterned portion is the heel and ankle of the bootie. With right sides together, sew the free end of the welt portion to the corresponding end of the garter stitch portion. See Figure 2 showing this completed. Make sure the fronts of the ankle are lined up correctly. You can follow a row of purl bumps around the ankle to help you do this. 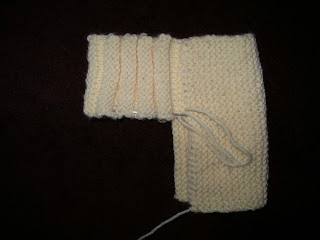 Turn bootie right side out. Make 2 or 3 small whip-stitches on top of each other at the top corner of the toe where it meets the ankle; this anchors the thread firmly. With a running stitch near the top edge of the toe, passing the needle through at each boundary of a “hill” and “valley” of the welts (Figure 3), gather the top of the toe of the bootie. Pull up the gathers until the top just closes. Squash the top flat so you are pulling the gathers together into a kind of radial starburst where the hole in the middle just closes. Insert the needle into the tops of the gathers and go around again to tighten the gathers. Make 2 or 3 small whip-stitches in the other corner near the ankle to anchor the thread. 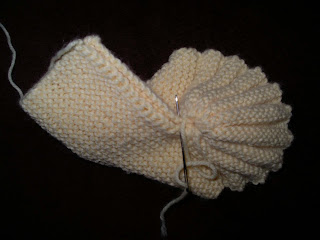 Make 2 or 3 small whip-stitches across the corners (Figure 4) to anchor one side to the other. Ensure the front edges of the ankle stay aligned. 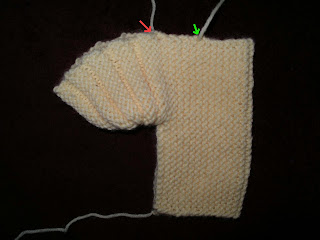 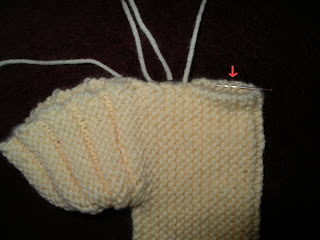 Make small running stitches along the first row of pearl bumps along the edge of the remainder of the heel opening (red arrow in Figure 6). Go completely around this opening with running stitches. Pull up the thread to gather the heel, go around the gathers again and pull up to tighten. 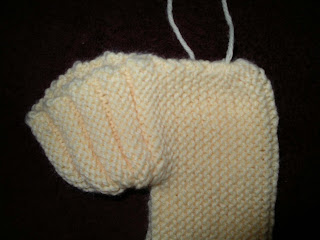 
Make two small whip-stitches at the place where you started, to anchor the thread. Heel is now rounded a bit, Figure 7. 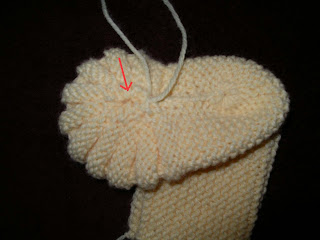 Run thread through the center ridge along the bottom of the bootie and bring up at the junction between the toe and heel portion (where you started in Figure 5). Make two small whip-stitches to anchor the thread. Gather the bottom of the toe the same way you did the top (arrow in Figure 8). Go around twice. Anchor the thread with 3 small whip-stitches. 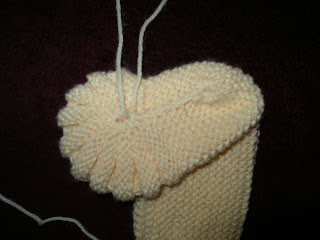 This is still the inside of the bootie. Completed bottom is as in Figure 9. 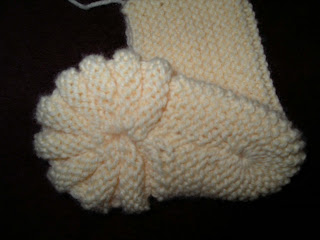 Turn right side out. Completed bottom is as in Figure 10. 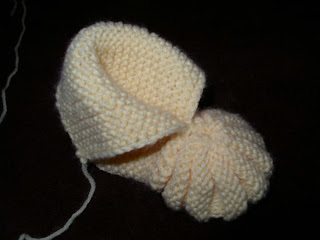 Fold over top cuff of ankle (Figure 11). You could stop now and weave in ends but there is no way to tie on the bootie to keep it from slipping off the foot. You'd have to add a casing or thread a thin ribbon or cord through the ankle fabric. Otherwise, proceed with sewing the cuff, below. 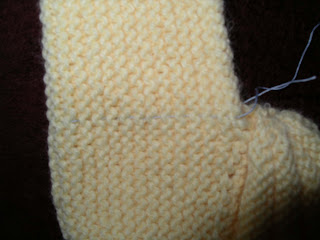 Starting at the front corner where the toe meets the ankle, thread a thin cord of contrasting color along a row of purl bumps to mark the place for sewing down the cuff (see light blue thread in Figure 12). The two ends of the marking thread should line up in front. If not, remove the stitching used in Figure 4 to tack the front corners together and line them up and re-stitch. 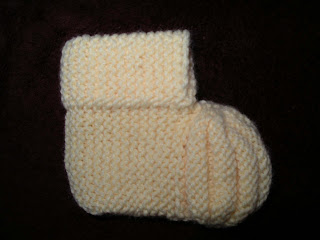 Fold cuff down and using a whip-stitch, stitch edge along the marked line. Tug just enough to hold it down, but not so much as to pucker it. The use of the whip-stitch leaves the fabric with some give in the ankle. Remove the marking thread. Completed cuff is shown in Figure 13. 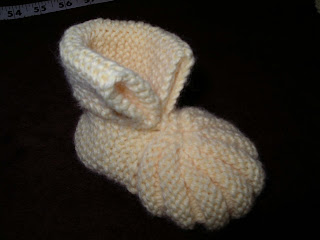 Weave in ends. Completed bootie is in Figure 14. 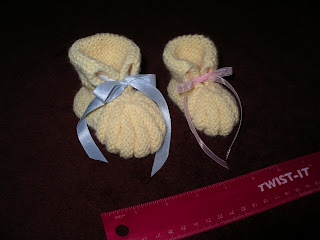 Excellent! Thank you for sharing.